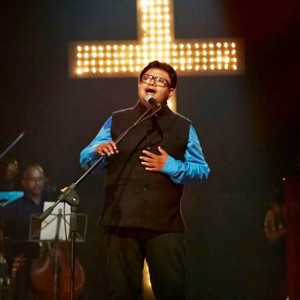 Premji Ebenezer is an Evangelist, singer, songwriter and record producer who is best known for his unique style of singing and songwriting that brought him into the limelight through his widely acclaimed Tamil debut album, Puthiya Anubavam. He started writing songs at the age of twelve and had also recorded three amateur albums by then. He made his first serious attempt at songwriting in 1997 after a road accident. Later while studying in Bible seminary he came up with his first album in English with original material, “Soul Survivor”. This was followed few years later by Puthiya Anubavam, the album that continues to influence the Tamil Christian community in India and around the world. Making a Tamil record was not part of his plans earlier, as he exclaims “writing songs in Tamil? Unbelievable!” A common feature of his music in the early years was collaboration with Stephen Devassy, a friendship that has lasted for over a decade. He also had the privilege of working with David Holmes of Hillsong Australia on the title track Puthiya Anubavam. Holmes has co-written songs like “Glorify thy name,” from the album “For all you’ve done,” with Darlene Zschech and also helped produce her solo album “Change your world.” In his second album he had the honor of working with Australia’s renowned recording engineer Andrew Crawford who has worked on some of the biggest hits in contemporary Christian music at 11th Hour studios. In addition to writing the songs and music he also produces and arranges most of his work (Post Puthiya Anubavam 2.) “Music must transcend boundaries of language and region.” This was the motivation behind Premji Ebenezer’s foray into Hindi music. Naya Savera was released in 2011 after toiling in the studio for days on end perfecting his Hindi diction and getting it right.

Many of his songs were born out of pain and personal tragedy. Having lost his mother to terminal illness very early in life he has an understanding of God that helps him communicate with people who have walked the road of suffering and disappointment. As he says “Real faith is evidenced not on the mountaintop, but in the deepest valleys. We are God’s pride and joy in a world that has turned its back on Him. He is looking for those who will seek Him through life’s highs and lows.” Many of his songs were written during those traumatic years when his mother was battling with cancer. As a matter of fact one of the songs was written right beside her bed in a hospital where she was being administered chemotherapy.  His mother’s demise in 2001 resulted in his family breaking up. It left him and his sixteen year old brother, Ranji at God’s mercy.  The Father up above took over their lives from that point.

Premji Ebenezer received God’s call for full time ministry when he was managing an export business on the outskirts of Madurai. He holds a Masters in Divinity degree and is an anointed preacher and worship leader. He lives with his wife, Rekha in Chennai. He has traveled to many nations preaching the gospel and ministering through music. His powerful testimony, music and preaching have impacted thousands of lives in a very short period of time. He believes that there is hope for a hurting world in Jesus Christ and His kingdom alone.