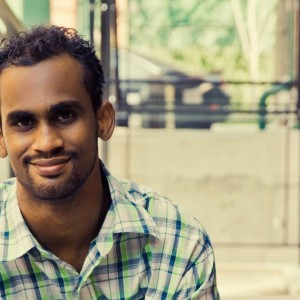 Jasinthan is an upcoming songwriter and a worship artist from Toronto’s Tamil Christian community. Born to a Hindu family in Sri Lanka, Jasinthan accepted Christ in 1997 after moving to Holland with his family. “Gospel music has always been comforting to me. I treasured and memorized them,” says Jasinthan.

After migrating to Canada, Jasinthan got his first opportunity to sing at a special meeting in his church. “It was a song from the album — Praise Forever — produced by Josiah Heflin”, remembers Jasinthan. That experience eventually led him to songwriting.

“I slowly started writing my own songs, each one of them inspired by God’s unconditional love and mercy that I witnessed, heard and experienced. Fundamentally they are my testimonies with tunes” says Jasinthan. Increasing need to support his family at an early age, Jasinthan leaned on his heavenly Father for guidance and comfort through difficult times. Those are certain experiences that later transformed as expressions of worship.

To Jasinthan, song writing is the “niraivaana parisu”, meaning “the perfect gift” given to him by the Lord. “It wasn’t an innate ability, but the Lord granted me, and it is amazing to be able to sing to Him.”