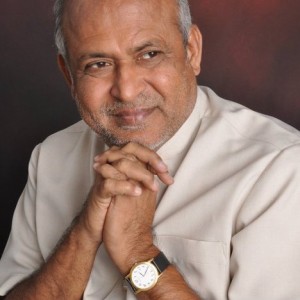 Fr. S.J. Berchmans was born in the year of 1949 at Madurai, Tamil nadu. Fr. S.J. Berchmans distinguished his call for the service to humanity in the very young days itself. He determined to dedicate his life and talents for the glory of God and joined a Roman Catholic Seminary. During the seminary days, he further developed his music talents and by the time of Priest hood, he had become a good singer well known in the circle. He started his ministry as the Priest of Satharasanpatti in 1978. He was doing it effectively but the soul of young Fr. S.J. Berchmans was thirsty for something better and creative.

Overcoming the tendency of floating with the water, Fr.S.J. Berchmans listened to the voice of God and allowed the Holy Spirit to move in his spirit to discern his calling. Innovation ahead of the normal spiritual procedures paved way for great revivals in central Tamil Nadu where the spirit of God worked wonders in people by deliverance and repentance through him. Lord’s ‘Charisma’ and the God given ‘Talent’ of man joined together and the number of people who attend the meetings increased from hundreds to thousands and thousands to ten thousands and there was an array of miracles after miracles. For the people, “this voice was new, this melody was different and naturally the result was great” Here you see the transformation of Fr. S.J. Berchmans into a dynamic exposure.

In this circumstance, the stage was too small for his potential to perform to the optimum level. By that time in early 1990, Audio cassettes, music programs and charismatic crusades of Fr.S.J. Berchmans became famous across the country and the tranformation to the next level of operation became too essential. Through Fr. S.J. Berchmans, God was enlarging the ways to transform His people through whom He wanted to act. As a clear sign, the villagers of the Kalayarkoil area in Madurai, convinced by the good intention, donated 5 Acres of land for the ministries of Fr. S.J. Berchmans. Here he comes to an open platform fulfilling his dream for a garden of prayer “Jebathottam”. Now, we see the presence of the Holy Spirit and mighty steady growth in the JEBATHOTTAM ministry. We believe that the Prayer at PRAYER GARDEN is the key behind this success.

Fr. S.J. Berchmans goes around the country with the word of God to spread the gospel, to deliver and heal people and to plant churches as an end result. Now he is being sent across the world as an effective tool for Holy Spirit to act upon people and places . Fr. S.J. Berchmans touches the heart of billions by his audio-video ministry in seven languages and in more than 50 albums. God’s name be glorified. This is the biography of a person who dedicated his life to God, who was obedient to God’s call and who allowed God to transform him with full heart and soul.