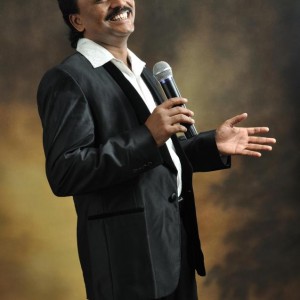 The Lord saved Eva. Albert C Solomon in the year 1984. from that moment of truth he grew in the Lord and the Lord enabled him to involve himself in the church activities, children’s ministry and in the music ministry. He was invited to many gospel meetings in order to play the guitar. His first individual endeavor was his formation of a prayer cell which was a humble beginning with a few people. With the anointing of the Holy Spirit upon him, the gift of the Holy Spirit empowering him and the talents evolving in him his ministry began to grow. Eventually God lead him to start the Grace of Jesus Ministries.

Eva. C.Albert Solomon travels the globe for Worship concerts and Preaching in countries such as Sri Lanka, Singapore, Malaysia and elsewhere. He resides in Chennai, India, with his wife, Priya and their son’s Judah and Ethan Solomon. And despite his many schelude, family is his main priority. He is a loving, caring, devoted husband and father. God brought many people towards His healing and forgiving presence through his ministry of healing, prophecy and deliverance. Many received healing and forgiveness and were blessed immensely. Word began to spread. Eva. C.Albert Solomon received invitation to present the word of God in meetings and various crusades from different denominations. He began to realize that many were touched by his singing unaware that the anointing was working within him. His love for worshiping the Lord induced him to integrate worship into his preaching. His potential grew with anointing of the Holy Spirit and discovered himself to be a worship leader. This new experience opened to him new avenues to explore and as the door of opportunities increased, he was able to produce seven volumes of ‘Praising Soul’ (ACD), two volumes of ‘Sing Praise’ (VCD) and One MP3.

He also had an opportunity to visit Sri Lanka and Singapore. There he witnessed the thirst of people for the Lord. His ministry there proved to be very useful in that he had enabled people to experience the powerful anointing of the Holy Spirit which brought forgiveness and united people by healing them of their bitterness. His depth in ministry has enthused him help in organizing several conventions. He has been invited as the guest speaker in conventions organized across the globe.